"The Heart of Darkness" and "Nights of Musk"

Of these two books much has been said. Much deserves to be said. 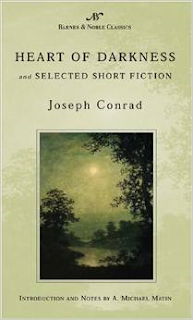 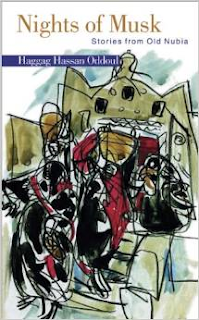 They share some similarities. Joseph Conrad was a Polish immigrant resident in England at a time when England was very xenophobic and superior-minded. He felt isolated and under-appreciated. He was one of what Salman Rushdie has called the"translated men" (a phrase I just love and feel akin to). So is Haggag Hassan Oddoul, in a way. He was born in Alexandria, Egypt in 1944 of parents who were displaced Nubians. He later helped to work on the Aswan Dam, which eventually completely drowned Old Nubia out of existence. His work in "Nights of Musk: Stories From Old Nubia" is an effort to chronicle life in Nubia before and after the Dam to preserve that part of him that is lost or feels alone.

In "The Heart of Darkness and Selected Short Fiction", Conrad draws heavily on his youth on the merchant ships of France and England. His highly fictional autobiographical style reveals his feelings of outsidedness. Four stories comprise this volume: "Youth" (originally published in 1898), "The Heart of Darkness" (published first in 1899), "Amy Foster" (1901), and "The Secret Sharer" (1910). The volume contains much scholarly material, including a lengthy introduction, timeline, endnotes, further reading suggestions for the serious Conrad reader, and even a short piece on various works inspired by "The Heart of Darkness". Conrad's feelings of alienation are most clear in "Amy Foster", but resonates in the odd intimation of personal disconnectedness from the events he (or rather the character Marlow) partakes directly in, as if he is watching someone else go through the motions, as it were.

Conrad used this character Marlow extensively. Of the four stories in this volume Marlow is the named narrator of two. By the time one gets to the last yarn, one automatically slips Marlow into the place of the unnamed first-person narrator by default. Marlow is a man of the times, with all the prejudiced views of other men of that time. And yet, he only half-believes it. For example, in "The Heart of Darkness"- easily Conrad's most recognised work and quite possibly his masterpiece- he speaks of women as being far removed from reality, happy in their illusions, and quite incapable of handling the truth. It is the responsibility of the men to preserve those illusions so that womankind can be safe and happy and protected. He speaks of the African natives as savages, niggers, and cannibals, unable to fully understand technology or be educated beyond a certain point. But that cuts both ways for Marlow. He also saves plenty of venom for his fellow white men, whom he calls pilgrims in order to highlight their hypocrisy and the fact that they- including Marlow himself- have no business in that part of the world.

Sometimes Marlow's vacillation between belief in the propaganda of the empires of the time and his disbelief in it can be hard for the modern reader to swallow. But "The Heart of Darkness" was critical in ousting the worst of the powers that were in Africa at the time and stopping what has been called the African holocaust. Based on Conrad's own experiences on the Congo River, from which he returned to England physically ill and mentally disturbed, the novella paints a murky picture of the truth that the empires tried desperately to keep from the people at large- all for the riches to be gained from ivory trade. The general public outcry became so loud and widespread that some changes were implemented. It did not end the suffering of Africa, but it eased it a little. Even today, people who work firsthand in needy Africa refer to this novella as a comparison piece.

Still, as I have said, the dominant feeling I was left with from the four stories collected in the volume was Conrad's disconnectedness as an outsider viewing the atrocities of others and living among those who would not fully accept him. It is said that "Amy Foster", in which this theme is dealt with most directly, is loosely based on his own marriage to Jessie George. These are the stories of a man trying to make it in a world that he loves but can only partially belong to.

The same feeling can be derived from Haggag Hassan Oddoul's "Nights of Musk: Stories From Old Nubia". This volume also contains four stories: "Adila, Grandmother", "Nights of Musk", "Zeinab Uburty", and "The River People". They are poetic stories which marry the Nubian tongue with the Arabic, since most characters in the story speak both, even if only brokenly. They are also simply written and easy to read. Unfamiliar terms- taken from both Egyptian languages- are explained in the text and in a small glossary in the back. Oddoul skillfully and effectively resurrects the sights, sounds, colors, smells, and thoughts of this lost world. It is easy to forget that one is not actually in old Nubia and amongst its people.

"Adila, Grandmother" reads like a piece very akin to an autobiography. A child who is half-Nubian/half- Egyptian visits his family every summer in the land allotted to the Nubians after the Aswan Dam was built. Eventually, he is accepted as completely one of them and marries his cousin, according to the tradition of the tribe. But the story clearly demonstrates the "translated man". Part of it deals with his life in Alexandria and his sister's utter contempt for anything Nubian even as he embraces it.

"Nights of Musk" is the best story of the volume, hands down. It is the most poetic. Its time-line is not linear. It contracts and expands like the heart muscle, like the annual flood of the Nile before the Dam interfered. It relies heavily on onomatopoeia and the senses. It is more a meditation than a story and is beautiful. Herein, more than any other story in the book, pulsates the life of old Nubia.

"The River People" closes the volume with an emotion of utter despair and loss. This is a story which clearly communicates the devastation wrought by dislocation, migration, and the slow hissing death of a way of life and it does so from the point of view of those left behind. In it, Oddoul has poured all the suffering and sadness of his parents, of himself, of those Nubians who were left behind in the indiscriminate mercy (or lack thereof) of the Aswan High Dam, and of that of the culture itself which died with the natural rhythms of the Nile. While "Nights of Musk" is the most pleasing story, "The River People" seems to drive home the purpose of the collection. The effect is a little unsettling.

Both of these books, when viewed as works of immigrant and/or displaced people, have a very great relevance today. It has been said that we are living in a time of the greatest migration of peoples since the fall of the Roman empire. The emotions, sufferings, and feelings of isolation which plays about the edges of Conrad's stories (being direct only in "Amy Foster") and which is the central moving theme of Oddoul's stories resonates in every continent and land on this earth. It is a global phenomenon that finds ready expression in these books which are both dissimilar and very similar.

Get "Heart of Darkness" on Amazon.

Get "Nights of Musk" on Amazon.

Legal Disclosure: the author of the message that directed you to this page has no material connection to any person, company, product, or service mentioned in that message. http://cmp.ly/0
Posted by Sabne Raznik at 10:24 AM