Book Review of "The Happy Mind" 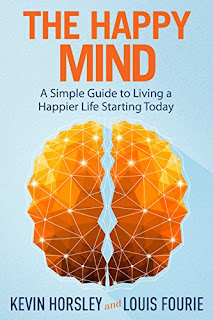 LEGAL DISCLOSURE: I was given a review copy of this book. I was not paid for this review.

"Simple" is the operative word in the title of this book. It is a handy little guidebook of reminders, cliches, and random quotes about how to train your thinking to a mindset of positivity. Many of the suggestions and principles are sound and beneficial. It's an easy, light read. You can breeze through it in an hour or two.

It is written to encourage interactivity. At several points, one is given a negative list and told to rewrite it as positive and then apply that positive list to one's life. Interactivity is a good idea. One is more likely to apply what one learns if one interacts with it on any level.

However, the sentences are usually written in the negative, not just the lists meant to be actively rewritten. The book seems more focussed on what happiness is not rather than what it is, what one should not do rather than what one should do. The negative perspective is subtle but it is pervasive. For a book meant to encourage positive thinking, that negative slant is directly counter to the message and the result is jarring.

Also, I understand that the authors wanted a light easy read, but the complete lack of references or even a bibliography at the end was a bad decision. If an author refers to a study in the text, that study should be referenced somewhere within the book. The total lack of anything to back up the statements within the text automatically discredits that text. It is possible to write a book with scholarly references to scientific and medical studies in a light simple way. This presentation leads me to believe the authors do not trust the readership's intelligence. Especially in the current climate of fake information, references are essential to back up any assertions.

In view of the shortcomings, I felt this book was written as a kind of children's handbook to happiness. (One could argue that the term "happiness" in this context is itself problematic and part of the culture that teaches us unhealthy thought patterns, but that's a whole other subject for a separate essay of its own.) It is helpful; the principles are sound and can be efficaciously applied. The attempt to include an element of interactivity is inspired if poorly executed. But it fails to implement many of its own suggestions in the way it is written and equally fails to back up its "facts" with appropriate references. In that way, perhaps, the authors erred toward writing too simply for this "simple guide".
Posted by Sabne Raznik at 12:11 AM No comments: