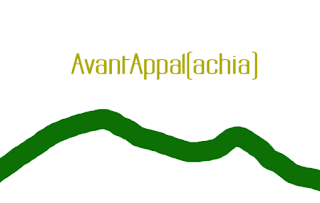 Posted by Sabne Raznik at 9:28 AM No comments: 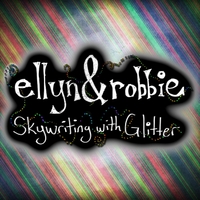 I first met Ellyn Maybe around 2012. She was formidable then; even more so now. Read my review of her "Rodeo For The Sheepish" album for more of those details. So it's been a while. The world has changed a lot since then. Maybe has moved on from Beyond Baroque into a new scene, poetics in general has continued to change, and Spoken Word has gained more respect as an art form that is both poetry and music - its own subset of art.

Accordingly Maybe has upped the ante since "Rodeo For The Sheepish". "Skywriting With Glitter"  features Robbie Fitzsimmons' ethereal music and vocals. In some ways, this album is much simpler and more emotional than "Rodeo". It's like a dream, a whimsical fairy tale a la "The Princess Bride" , The Little Prince", or "The Point".  This is immediately apparent with track titles like "Myth", "What Color is Your Parachute", "The Girl of the Wishing Well", "The Life of a Raindrop", and "Kingdoms in a City Lost to Time". This isn't merely Maybe reading her poetry over Fitzsimmons music, however. Sometimes Fitzsimmons sings haunting lullabies.

Like many lullabies we were sung as children, these whimsical fairy moments have dark underbellies. I can't decide if these are slightly masked emotional introspection or densely weaved commentaries on modern society. At times they could be either or both. The girl in the wishing well nightly "looks history in the eye" and "chews on life a bit". "The Life of a Raindrop" could be a tongue-in-cheek description of recurring depression or angst. "Onset" is clearly about a midlife crisis. "Kiko of Greenville" is an interesting comment about social media. "Anybody" is about the posturing we as humans do to be accepted by those who surround us. But even in its darkest moments, the album never becomes full blown negative. "Kingdoms in a City Lost to Time" proclaims "you are all that you need."

Fitzsimmons' piano and vocals are intrinsic to the overall other-worldly feel of the album. For me, the best track is "Up Is Down". This is lyric poetry at its best, except it is sung. "Dance in moonlight cloud/ forsake the human crowds/ swim into ancient gowns/ underground// there is a light above/stars in the sea of love /reflection in the scope of all you mention"... "Sink into a world of sand/ just like any other man". I could listen to this on repeat some nights.

"Skywriting With Glitter" trumps "Rodeo For The Sheepish" as well as complements it. It's hard to foresee how Ellyn Maybe can improve on her work from here, but I'm eager to find out. And I'm just as eager to become more acquainted with Robbie Fitzsimmons.

Get your copy of "Skywriting With Glitter" at CD Baby.
Posted by Sabne Raznik at 9:44 PM No comments:

(Issue) 2 Deadline is Upon Us! 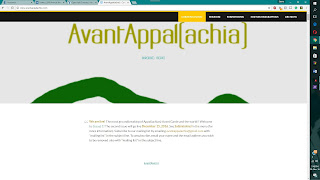 AvantAppal(achia) is about to publish its second issue of experimental writing and visual art from Appalachia and around the world. Please, join our family by submitting your visual art, short stories and poetry by November 30, 2016. We need you all and love every one of you! Full information regarding submission is available at www.avantapalachia.com. (Issue) 2 will go live on December 15, 2016.
Posted by Sabne Raznik at 8:08 PM No comments: