Modern "Much Ado About Nothing"? 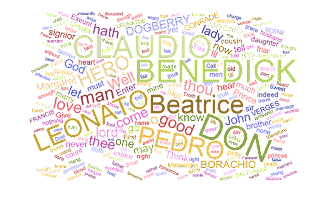 There is an internet-inspired trend in text analysis that involves computer tools, such as the above word cloud. The theory is that these various tools will help someone approach a text in a different way than one has before. This word cloud was produced by entering the text to Shakespeare's "Much Ado About Nothing", which I love, into a word cloud-making website. I must admit that for me such tools would be more helpful when composing collage poetry (because it helps to disorient the text and break it up) than in formulating text analysis.

For instance, one would naturally eliminate the character names, since of course they would be the most frequently used words in the text, and then concentrate on what is left. From there, the poetry combinations are endless and exciting and almost write themselves. But those poems would only be text analysis to the point that any collage poem is, and most poets who employ that form are thinking of anything except what is traditionally considered analysis.

So I tried a different tool: ﻿Storify. In the end, I didn't so much write a story as use it to search hashtags and internet search engines for new perspectives on "Much Ado". And I found one.

"These Paper Bullets!" is a modern take on "Much Ado" with the music written by Green Day frontman Billie Joe Armstrong. Green Day started out in the '90s as a modern punk rock/alternative band. Since then it has become a little more pop in its aesthetics, but with a decided punk edge. Recently, Armstrong redefined what the Broadway musical could mean with his wildly successful "American Idiot" musical. "These Paper Bullets!" was his next theatrical project. The storyline revolves around a band called The Quartos, modeled after the early Beatles, and its members' search for true love in the midst of fame. Unfortunately, a recording of the full production doesn't seem to exist, which left plenty to my imagination.

Other than the curious aspects of "what would a punkish/Beatleseque version of 'Much Ado' be like?", there are also larger questions that could be explored. Much of Shakespeare's original play hinges on witty, sarcastic humor with a decided gender bias. Benedick is against marriage and very much a spouter of male virtues, almost to the point of chauvinism, and Beatrice is very much a hard-bitten feminist. Funny, then, that they should eventually fall in love with each other based on hearsay. How uncharacteristically suggestible of both of them! How would that work in a modern setting?

For instance, in this post-feminist world, why would a woman feel a need to despairingly rant out the "O to be a man" speech? The whole dynamic of the plot may have to be reworked, but what is "Much Ado" without the friction and the obvious social critique of his time that Shakespeare meant it to be? Also, it is no longer a life and death matter whether Hero really "tarnished" her honour or not. That too would have to be rewritten. What, therefore, would be left of the original play?

These are things which I was forced to consider and which caused me to view "Much Ado" as a masterpiece of wit that can continue to survive due to that wit only. No longer can it also be a painful mirror held up to society which is barely made palatable by that wit. How I wish I could have seen "These Paper Bullets!" in order to have at least one set of answers to these questions.

Do you think "Much Ado" still works as a social critique? If so, in what ways?