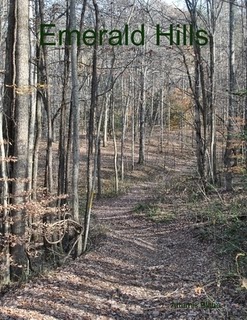 Artemis Blithe is a poet currently living in Eastern Kentucky, U.S.A., but he is far from the stereotypical Appalachian poet. Blithe's work falls squarely into the realm of performance poetry. His book "Emerald Hills" is available through lulu.com.

Blithe's poems are written in a flow-of-thought prose style, so it is difficult to sense the rhythms that one hears when he reads. His grammar is at times intentionally askew. The odd misspelled word is thrown in. He writes with an almost overbearing megalomania that clearly draws from Walt Whitman. In fact, he could be a modern version of Whitman. Blithe rages all over the pages, declares general superiority, and champions a return to living in harmony with the earth. His statements are just as absolute, his declarations just as forceful, as Whitman's ever were.

But the power of the words and lines is greatly diminished in the medium of print. His is a poetry not meant to read. It is meant to be heard, to be delivered in a bombastic whirlwind of dramatic rapping, to be punctuated by audience participation in the form of applause and spontaneous shouts of agreement as if it were a sermon delivered by a hiccupping old regular Baptist or Pentecostal preacher. Maybe that is what Blithe is: a preacher of his own unique faith. But if he is a leader, the path he intends to lead us on is not well-defined. It is the path of an angry soul who is still searching himself. Was that perhaps true of Whitman in the day?

As a book of poetry in print, "Emerald Hills" does not work. But should you have a chance to hear Blithe read, then the mess of the print will make sense and ignite with hard-hitting gunpowder. Artemis Blithe proves himself a solid descendant of the Beat generation and of that universally acknowledged father of American poetry Walt Whitman.

Legal Disclosure: The author of the message that directed you to this page has no material connection to any person, company, product, or service mentioned in that message. http://cmp.ly/0
Posted by Sabne Raznik at 11:41 AM