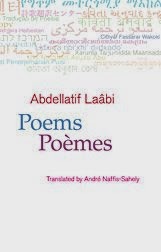 Abdellatif Laâbi is an acclaimed Moroccon poet writing in the French language and the Poetry Translation Centre of the UK has published a chapbook of his work translated into English by André Naffis-Sahely. It is, of course, too short to be representative of decades of poetry, but is a fine testament of admiration to Laâbi.

Naffis-Sahely explains Laâbi's clashes with Moroccon authorities in the introduction. Apparently the poet even spent some time imprisoned, which is mentioned in the poetry as well. It is clear that Naffis-Sahely has a deep respect for Laâbi and his poems. This respect is evident in the translations.

I do not pretend to be an expert in French. Indeed, I could use some refresher courses. But to the ear of a non-native speaker who, it must be said, became less fluent as I went along, the French of Laâbi's poems is not overly concerned with the inherent musicality of the language. Instead, he seems to employ rather direct wording. I do not think it very possible for French to be gruff, but if it could I get the sense he might take that route. In the absence of that ability, the nearest descriptive word could be straight-forward (?). I add the question mark because even that does not seem to adequately describe my impression, but is the closest approximation. He does not seem to strive for pretty; what he seeks is impact.

This is something that Naffis-Sahely strove to bring over to the English translations. And English is a language that can do straight-foward, even gruff and worse, quite well. The challenge for Naffis-Sahely was to translate impact without becoming too rough and thus losing the quality of French to always remain somewhat pretty when the subject is anything but. He succeeded. For example: "I hear the wolves/ switch the lights off at midnight/ and lawfully rape their wives" (from "The Wolves").

Standout poems are "My Mother's Language", "The Wolves", and "The Poem Tree". The most truly beautiful poem in the chapbook is, for me, "La Terre S'ouvre et T'accueille" translated "The Earth Opens and Welcomes You". It was written for Tahar Djaout, a writer killed in Algiers in 1993.
"O my friend
sleep well
you need it
because you worked hard
like an honourable man

Legal Disclosure: the author received a review copy or a preview of a product, service, or topic mentioned in that message. http://cmp.ly/1
Posted by Sabne Raznik at 7:20 AM