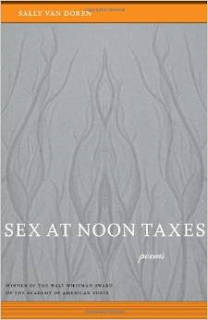 Sally Van Doren presents a unique collection of poems that play with words, grammar, double entendres, and poetic devices freely and joyfully. The title Sex At Noon Taxes is a palindrome and the title of a painting by Ed Ruscha. It proves a most fitting title.

Van Doren loves nothing more than wordplay- and very little of it is subtle. In a typewritten interview included with the book Van Doren reveals that her father would correct their grammar as they discussed their respective days around the dinner table. He was a true stickler who delighted in proper English. Although she happily admits her use of that grammar is anything but strict, those evenings left their mark. Consider the poem Preposition:

The before took us right up to
the after, even though under
meant we should not try over,
from being stronger than to,

up shying from its ascent
in the face of down. I held
on to you and beside you
I became with and about.

In our around, the near/far
could turn away and toward,
within the without. By my above
and your below, the wheres and

whens retreated, leaving time
and space stranded, in off, on out.

This could be an account of those dinnertime discussions punctuated with corrections. It could be about the complexities of relationships. It could also be merely a game of playing with these words and grammatical phrases themselves. In any case, it makes for fun reading, don't you think? I especially enjoyed the image of "up shying from its ascent/ in the face of down." Van Doren clearly has an ear finely tuned to language and its peculiars.

This is also a poetry of deep emotional substance even in the midst of play. Sited is outstanding in this regard:

He was here then, back
when I was there; you
were with me; you weren't,

the then being before the
beginning of the unlife,
the not-thereness having
not yet taken hold of his

hand. The trust in his
estate was in its undoing,
the disassembled vehicle
of non-necessariness.

Many mounds of here
landed on his whereness;
we hoard them.

Such longing in this poem! The pain of separation, of neither party being where they were when they were together, is searing here. There is a straining against the nothingness, the emptiness, the wondering of what was and could have been. Absence is the center of this poem, even as it continues to play with wording and syntax. In fact, the play in this instance very much emphasizes the gaping hole that is grief. One is left feeling as if one were free-falling perpetually through an endless space that has no bottom, which is the very essence of the feeling of ultimate loss.

There is also another way in which the title is fitting. Van Doren displays something akin to obsession regarding visual art throughout the collection. An example in one poem equates the complexities of romantic love to various colors splashed randomly on a canvass. Even where there is not direct reference to painting or other forms of visual art, she demonstrates a skill in using words to create striking images in one's mind.

Van Doren's work here is athletic in its use of language, passionate in its use of imagery, and sensitive to the nuances of human experience. Not bad for a debut collection at all.

Legal Disclosure: The author of the message that directed you to this page has no material connection to any person, company, product, or service mentioned in that message. http://cmp.ly/0
Posted by Sabne Raznik at 4:45 PM