Review: "The Architecture of Chance" by Christodoulos Makris 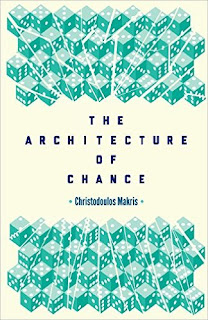 Christodoulos Makris has established himself as one of the most important experimental poets working in Ireland today. The Architecture of Chance is his latest offering.

This is an exciting collection. Makris is fearless in his experimentation and is pushing poetry into whole new forms and realms of being. Most notable in this regard is "Chances Are", which he calls a mass collaboration poem. It appears in the collection as its HTML code. This poem can be found in application at 3am Magazine. It is a poem composed of every tweet that uses the word "chance" and updates in real time. Another boundary exploder is "From Something to Nothing" in which he took an informational text on the International Monetary Fund website and cycled it through several languages back and forth on Google Translate and turned the results into a poem that reveals much about the dynamics of language in the age of the internet. Given that Makris hails from Cyprus and has spent time in the United Kingdom while being based in Ireland, this experiment could be read as a commentary on the migrant experience.

Many of these poems are also political in nature. In "16 X 16" he writes: "I would have been a completely different person without the politics and a completely different writer." This is evident in poems like "Metro Herald's Advertorial Windbags Let Loose, 28-31 May & 4-7 June 2013"(which, as the title suggests, is a composition of adverts and editorials from Dublin's Metro Herald newspaper), "Civilisation's Golden Dawn: A Slideshow"(which contains pieces of speeches made by members of Greece's Golden Dawn party, whom Makris describes as neo-fascist), and "Public Announcement" (composed from the signs hanging in the Skerries public library on a certain day).

Others are slightly more domestic. Some are composed from emails or tweets sent back and forth in collaboration. One is composed from bits of conversations overheard around Dublin on a particular day. My personal favourite is "Heaney after Rauschenberg", which takes all the four letter words from Seamus Heaney's first collection Death of a Naturalist and places them in order of appearance. While soothingly familiar in vocabulary, it decenters Heaney's careful poetics almost completely, as if Heaney fell into a black hole when he died and this is all that is left of him in the universe. In that sense, it serves as an eerie, aching tribute of sorts - even as it seeks to shatter the comfortable traditionalism of  Heaney's legacy. Here is a brief excerpt:

from that held arms came with have them word dead till"

This is definitely a book which requires the reader to "do the work" (Anna Strong), but the rewards are substantial. The break with Romanticism and traditional verse that began with the Modernist movement at the turn of the 20th century is spinning into free fall out of control as we become firmly entrenched in the 21st (much like society in general) and, like other experimental writers like him, Makris is making sure this is well represented in today's poetry. Only, he may be doing it better than most.

You can buy it at Amazon.
Posted by Sabne Raznik at 5:31 PM